All wealth comes from production and exchange: making and trading goods and services. The two are closely related: the more you trade, the more you’re able to produce. How does that work? Through the magic of specialization. 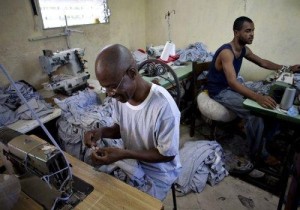 When you trade, you’re able to specialize in your comparative advantage, that is, what you can do relatively cheaply compared to everyone else. If you didn’t trade, you’d have to make everything yourself: clothes, food, shelter, transportation, health care, etc. You’d be very, very poor. By trading with other people, you can focus on doing one narrow thing really, really well, earning money, and trading that money away for other goods and services that other people focus on doing really, really well.

When more people are trading, the market is larger. Then each person will specialize on a narrower task (the division of labor), and everyone will be more productive. That means more wealth and a higher standard of living for everyone. This is what Adam Smith meant in the Wealth of Nations when he wrote, “The division of labor is limited by the extent of the market.”

What if you’re worse at everything than everyone else? Imagine that you’re the people of a very poor country, like Haiti. Will you be able to trade anything with a very wealthy, productive country, like the United States? Yes! Comparative advantage shows why.

Imagine a simple economy with two goods: wine and cloth. The U.S. is more productive at both than Haiti, let’s assume. American workers can make 40 units of wine per worker per year and 20 units of cloth. So a unit of wine in the U.S. will cost half a cloth, or equivalently, “a cloth” costs “two wines.” Haiti, on the other hand, can only make 2 “wines” and 4 “cloths” per worker per year. So in Haiti, “a wine” costs “two cloths,” and “a cloth” costs “half a wine.”

Now imagine that you’re a Haitian with a unit of cloth, and you want to buy some wine. Would you rather buy wine from the U.S. or Haiti? In the U.S. wine costs just half a cloth, but in Haiti it costs two cloths. Clearly you’d rather buy from an American with wine.

But will an American with wine want to buy from you? Yes! After all, cloth costs just half a wine in Haiti, much less than the two wines it costs in the U.S. So an American with wine will want to trade that wine to a Haitian with cloth, and vice versa. They’ll settle on a price “in between” the prices prevailing in both countries, let’s say 1:1.

What can Haitians do to make themselves wealthier? Specialize! If all Haitians made cloth, they could make 4 per worker per year, then trade some of them to Americans for wine at a 1:1 ratio. For instance, they could keep two cloths and sell two, yielding two wines. Two wines and two cloths per worker is more than they could have had before trade. Before trade, if they spent half their time making wine and half their time making cloth, they would have made just two cloths and one wine per worker. With trade, Haiti now has an extra wine per worker. I’ll leave the analogous demonstration for Americans as an exercise for the reader.

Does Haiti in fact trade with the U.S.? You bet. The U.S. is Haiti’s #1 export destination. T-shirts are Haiti’s main export to the U.S. American workers are probably more efficient at making t-shirts than Haitian workers are. Still, it makes sense for our workers to concentrate on making microchips, software, industrial chemicals, financial services, higher education services, and other skill-intensive goods and services, and outsource the t-shirt making. We can’t do everything – or if we did, we’d be very poor.

So the lesson of comparative advantage is that so long as you specialize in what you can do relatively cheaply compared to everyone else, you don’t need to be the best at something to benefit from trade and specialization. Specializing in rare skills can be particularly lucrative. Because these skills are in short supply, they can command a high price. And because the price is high, it might be fairly easy to become the “relatively cheap provider” of the skill, so long as you have some natural talent in that direction. Comparative advantage not only helps you understand why globalization is so great for humanity, but it also helps you figure out how to be successful in your own career.

Here’s a little quiz to see whether you understand comparative advantage. I’ll post the answers next week. Try your hand in the comments!

1. Imagine you’re the chief executive of a successful information technology business. You rose through the ranks as a graphic designer and are very good at that, but you’re also a good manager and fundraiser. Your task now is to write up an annual report for the shareholders. Should you use your graphic design skills to format an excellent annual report, or should you simply type up the information and delegate the formatting of the report to one of your employees?

2. Imagine the U.S. opens up to imports of clothing from China. What happens to the price of clothing in the U.S. and in China?

3. Does opening up to Chinese clothing affect the quantity of U.S. exports, say, of microchips?

4. Does opening up to Chinese clothing affect the price of microchips in the U.S. and in China?