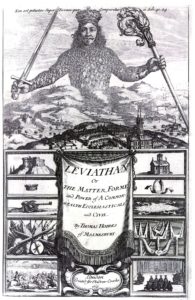 Frontispiece of “Leviathan” by Thomas Hobbes

The alert reader may recognize this game as an example of the simple, two-player Prisoner’s Dilemma. The students read part of Robert Axelrod’s The Evolution of Cooperation, which shows how cooperation can emerge and survive in human groups even when individual people have a short-term incentive to defect from cooperation and cheat others. The key to cooperation turns out to be indefinite repetition of the game, which induces players to build a reputation for being cooperative, but also being willing to retaliate against defectors.

The Prisoner’s Dilemma game relates to a classic argument for the state from Thomas Hobbes’ book, Leviathan. Hobbes thinks people will rarely cooperate with each other unless forced to do so. Although he didn’t formalize his insight in a Prisoner’s Dilemma game, he essentially applied the same logic to argue that under anarchy, humans are in a constant state of mistrust and warfare.

At Learn Liberty, I talk a little about a contemporary defender of Hobbes’ argument, Steven Pinker. Pinker’s book, The Better Angels of Our Nature: Why Violence Has Declined, is a masterful attempt to explain why you are less likely to die from violence now than your ancestors were. While much of the book is persuasive, one part of the argument – the claim that the emergence of states about six thousand years ago saved humans from the Hobbesian trap – lacks sufficient evidence. In general, while Pinker does acknowledge the beneficial role of “spontaneous” cooperation that isn’t enforced by some outside power, he’s too optimistic about the incentives of third-party enforcers to play a constructive role in enforcing cooperation. From my post:

[T]here is an important conceptual problem for the claim that the rise of the state improved human welfare by reducing violent deaths.

After all, early states arose almost exclusively out of conquest, as Pinker concedes. They started as roving bands of armed robbers, who eventually found that converting robbery into regularized taxation would destroy less wealth and generate more revenue over the long run. Autonomous peoples do not go into “subject” status willingly.

More at the link.