What duties do businesses have toward others, apart from refraining from violating their rights or otherwise treating them poorly? Do they have a responsibility to help solve social problems? Milton Friedman answered this question in a famous 1970 essay, “The Social Responsibility of Business,” with a resounding “No!” Was he right?

Friedman says that managers of businesses owe their jobs and allegiance to the owners, that is, the shareholders. If they violate the trust shareholders have put in them in order to try to solve social problems, they act wrongly. Now, the owners of a company might have objectives other than profit. Nonprofit charities are the biggest example. Friedman’s point is that managers must act on behalf of their employers, not their own interests or objectives. That’s their job.

Resources are scarce. If business managers focus on solving social problems, they must pay for it. Keeping wages high may well require keeping prices higher or reducing the profits of shareholders. Keeping prices low can create shortages and, again, reduce profits.

Profit-seeking is generally good for society. Think back to the example of the Oregon warehouse full of lumber when a hurricane hits New Jersey. If New Jersey lumber yards kept prices low despite the increase in demand, they’d run out of lumber quickly, the lumber wouldn’t necessarily go to the highest-valuing users of the lumber (just those who got there first), and the market wouldn’t get a signal that New Jersey needs more lumber. The Oregon lumber owner wouldn’t ship to New Jersey. High profits in an industry are the market’s signal that society needs more entry into the industry. Profit-seeking directs resources where they’re most needed. Therefore, there’s nothing inherently wrong with trying to make a profit. 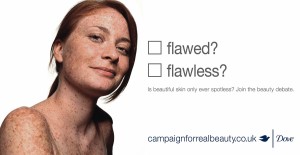 Dove’s Campaign for Real Beauty is a good example of a company’s use of “social responsibility” to create goodwill and sell more products.

Finally, businesspeople don’t necessarily know how to solve social problems. They know their own businesses, but their comparative advantage doesn’t lie in understanding how the economy or society works overall. Will one firm’s hiring “hard-core unemployed” out of a sense of duty actually make society better off or simply cause the business to stagnate or fail, benefiting no one in the long run? It’s hard to know.

Friedman thinks it’s OK for businesses to use the language of social responsibility to sell things. In fact, businesses try to create goodwill among consumers — and perhaps more morale among their employees — by doing things to “make the world a better place” (see the Dove ad above). If it’s a good business strategy, Friedman doesn’t condemn it, though he says he admires companies that don’t cloak their perfectly respectable pursuit of profits in a false garb of altruistic motivation.

Friedman’s thesis is sometimes misunderstood, because he himself wasn’t completely clear about it in his 1970 essay. He isn’t saying businesses must be only interested in profits; he simply means that it’s OK if businesses only pursue profits, so long as they respect basic morality like everyone else. (You mustn’t drum up business by threatening to break people’s legs.) Although he doesn’t say so explicitly, presumably profit-seeking activities that are socially harmful, like lobbying the government to hamstring your competitors, would be wrong.

In a competitive, private economy, businesses’ everyday product and labor decisions benefit society whenever they’re directed at maximizing profits. Since society benefits from businesses’ narrow focus on profits, that focus can’t be wrong. Businesses don’t generally know how to solve social problems; that’s not their specialty. Scholars, charities, and policymakers can each do their part to solve social problems without browbeating businesses into empty gestures.