Gold, Money, and the Great Depression

What caused the Great Depression? There’s no shortage of popular theories. Some say it was an inevitable consequence of capitalism. Others claim it was the big stock market crash of October 1929 that started it. Yet another hypothesis says that the 1930 Smoot-Hawley Tariff, highest in U.S. history, turned a recession into a depression.

All these explanations are false. Economists have come to a near-consensus on the causes of the Great Depression, because the evidence closely fits a monetary explanation. This explanation essentially combines findings from Milton Friedman and Anna Schwartz’s 1963 book Monetary History of the United States and Barry Eichengreen’s 1992 book Golden Fetters, which adds an international dimension to the Friedman and Schwartz story.

Federal Reserve mismanagement caused the U.S. economy to turn from the “roaring Twenties” to a sharp recession in 1929-1930. Check out this chart of U.S. money supply growth from Barry Eichengreen’s article, “The Origins and Nature of the Great Slump Revisited.” 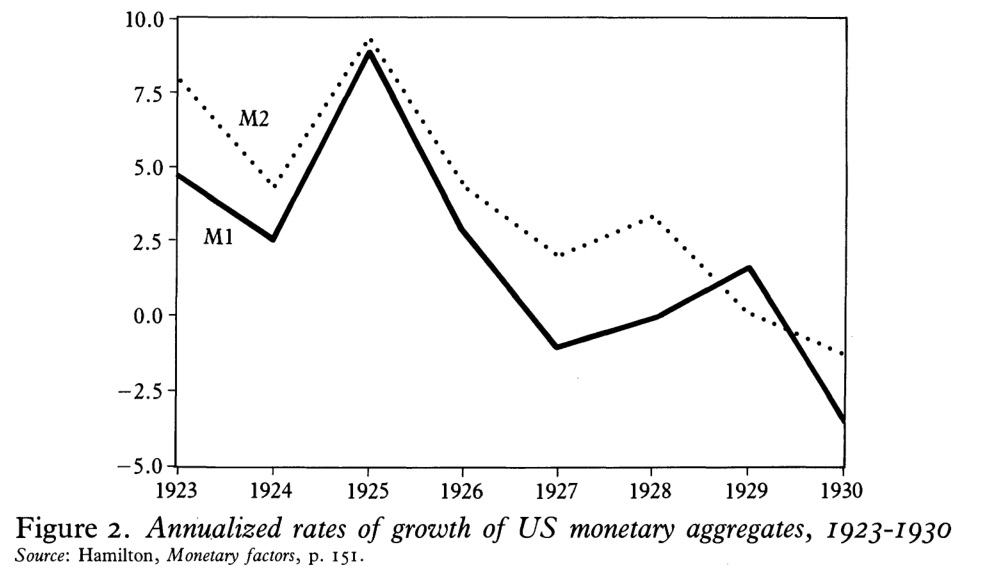 The Federal Reserve was responsible for providing a stable money supply, but as the chart shows, they failed at that task. The classical gold standard had led Americans to expect 1-4% money supply growth per year. After World War 1 and the establishment of the Federal Reserve, however, the central bank had massive gold reserves and discretion over the money supply. As Eichengreen’s chart shows, money supply growth was rapid in 1923, 1924, and 1925. It returned to relatively normal levels in 1926, 1927, and 1928, and then the Federal Reserve dramatically tightened the money supply in 1929 and 1930 out of fear that stock prices were “too high.” As Friedman and Schwartz put it, the Fed drove the economy into recession in order to pop a nonexistent stock market bubble.

That wasn’t the end of the story, though. The economic trouble in the U.S. spread to other countries. The reason was the international monetary system, called the “gold-exchange standard.” The gold-exchange standard differed from the classical, pre-WW1 gold standard in allowing central banks to maintain lower gold reserves and instead hold dollars and pounds sterling as reserves. As a result, investors couldn’t be sure every country on the new gold standard really could stay on the standard. If they started losing gold reserves, they might just abandon gold convertibility, and then the value of the currency would drop. Many countries lacked credibility, in other words.

The other problem with the gold-exchange standard was enhanced network effects. If Britain went off the gold standard, then the pound sterling would lose much of its value, and so would everyone’s pound sterling reserves. So the countries holding pounds sterling would also have to go off the gold standard, unless they wanted to buy up massive amounts of gold on international markets, which would be costly both for the central bank and for the market (because it would significantly drive down money supply).

When the U.S. contracted the dollar supply, gold flowed to the U.S. as the value of the dollar rose. Foreign holders of gold wanted to invest in the U.S. dollar. But there’s a limited amount of gold in the world. As the U.S. Federal Reserve attracted gold, other central banks lost it. But you can’t keep losing gold and stay on the gold standard. So the other central banks had to reduce their money supplies as well, to attract gold back. With every central bank scrambling for gold by contracting the money supply, they drove all their economies into recession.

Why did monetary contraction lead to recession? The best story for the Great Depression years seems to be sticky wages. Monetary contraction reduced the price level (deflation), which caused real wages to rise, making workers unaffordable. So employers laid off workers, creating persistent unemployment. Figure 3 from Eichengreen shows what happened to prices in some major economies as the global recession deepened. 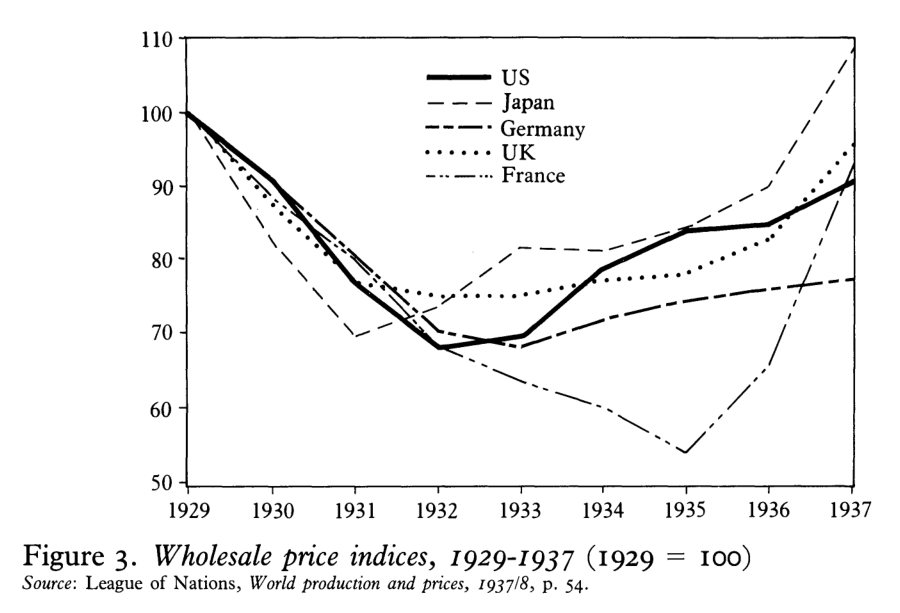 Between 1929 and 1932, prices collapsed by more than 30% in the U.S.! That’s the inevitable result of far less money chasing about the same amount of goods. Note that France saw massive deflation all the way through 1935. France stayed on the gold standard until 1936.

Now look at what happened to wages as the Great Depression set in (Figure 4). 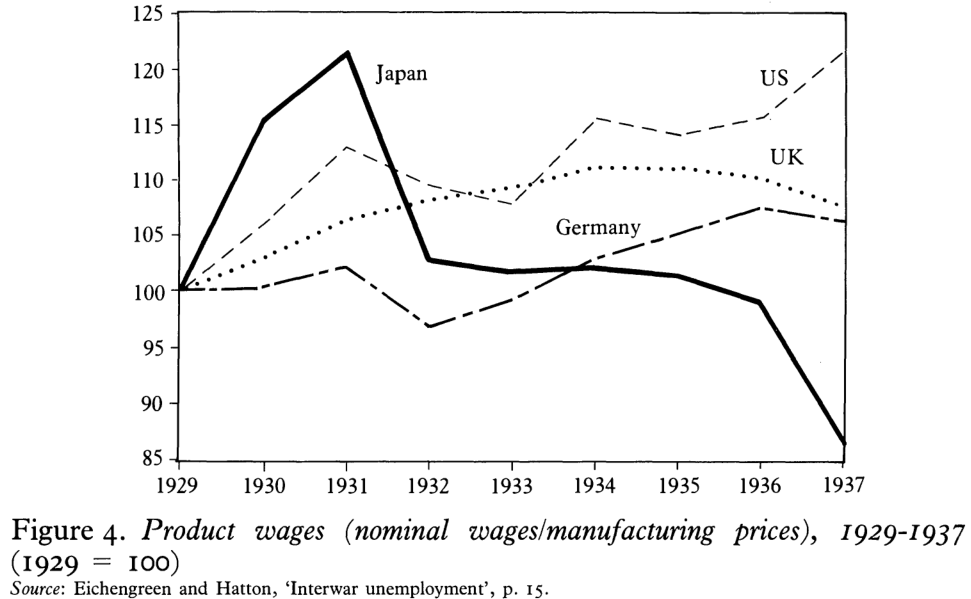 Wages adjusted for deflation rose in all these economies in the first two years of the recession. That’s the last thing you want to happen to wages in a recession. You want wages to fall in a recession so that employers will start wanting to hire again. Check out what happens in the U.S. The U.S. sees real wages rise 20% from 1929 to 1937! No wonder the U.S. had the worst depression of all the major economies: workers couldn’t get jobs at these elevated wages. 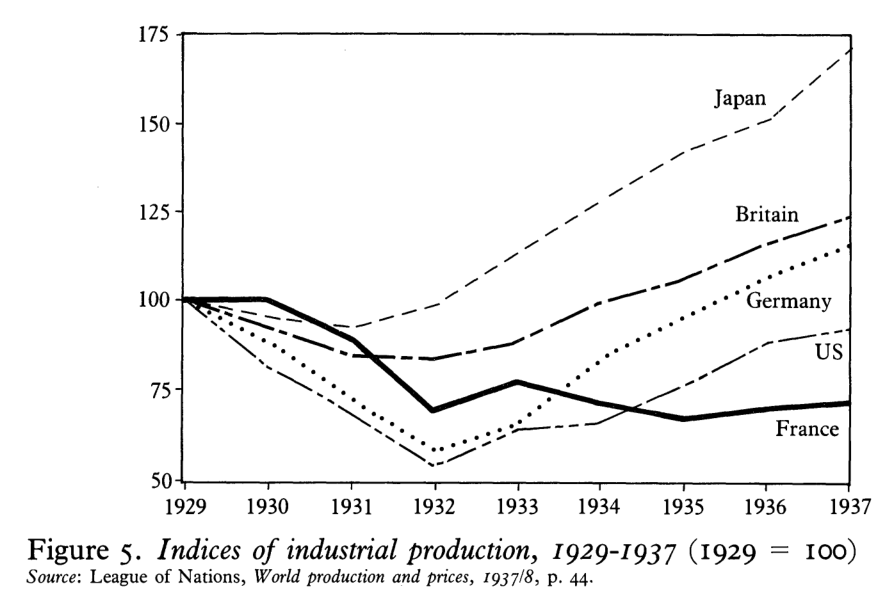 Countries that got off the gold standard earlier recovered more quickly (Table 2). Countries that allowed their currencies to float freely in international markets, where their exchange rates were set by supply and demand, did better than exchange-control countries that tightly regulated people’s ability to convert their money. 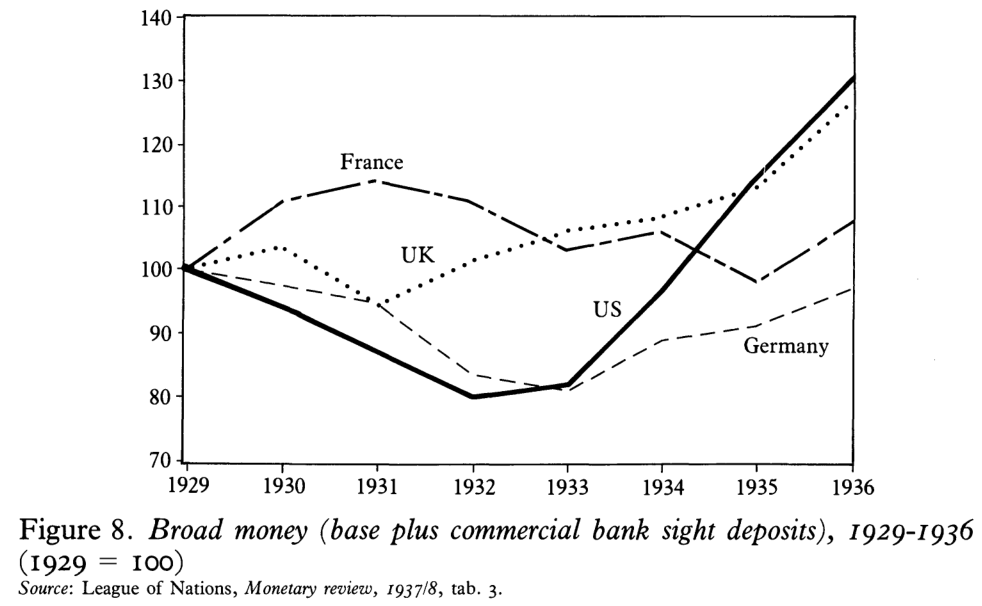 Part of the reason the U.S. had such a huge collapse in money supply in 1931 and 1932 was that the Federal Reserve allowed many banks to fail when they suffered runs. Most of us have seen the movie “It’s a Wonderful Life” in which Jimmy Stewart’s character persuades bank customers to take a small share of their deposited money at once and come back for more later. The bank was profitable, but it didn’t have on hand most of the deposited funds, because it had loaned them out.

Well, prior to the Federal Reserve, banks had done something similar. It was called “suspension of payments,” and it allowed solvent banks to deter runs. The Federal Reserve banned the practice and then allowed solvent banks to fail simply due to illiquidity (not having the required funds on hand). When a bank failed, all the deposits in it disappeared. The money supply fell.

Now, if going off the gold standard helped Japan, Britain, and Germany so much, and staying on the gold standard until 1936 hurt France so much, why was the U.S. recovery from 1933 to 1937 so weak? Let’s think back to that chart showing U.S. real wages climbing year after year during the Depression. There’s a good reason for that. FDR’s New Deal programs were explicitly intended to keep wages high. Back then, they thought this would “stimulate” the economy. How wrong they were. The National Industrial Recovery Act (invalidated by the Supreme Court in 1935) and the National Labor Relations Act that was enacted in 1935 forced large companies to keep prices and wages high. That ended up being a fundamentally wrongheaded policy choice, and it kept the U.S. economy in the doldrums even as other economies made their recovery. By 1938, the Federal Reserve was foolishly tightening monetary policy again, and the U.S. experienced the second-worst year of the Great Depression. The U.S. economy didn’t really emerge from depression until 1946.

So what caused the Great Depression? Bad U.S. monetary policy and a badly designed international gold standard that spread recession from country to country.

Postscript: Here’s the full version of Milton and Rose Friedman’s Free to Choose TV program on the Great Depression: