Learning Challenges the ‘Web of Belief’ 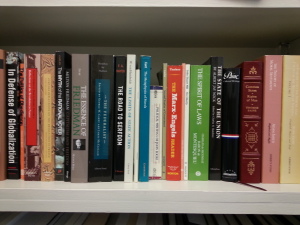 The philosopher W.V.O. Quine came up with the theory of the “web of belief.” According to this theory, our beliefs are a kind of web, in which each individual statement depends on other statements. As we learn new things, we change those statements that are no longer tenable and adjust other statements that depend on them. Those beliefs nearer the “core” of the web are more “fundamental” than those nearer the periphery in the sense that it would take more powerful evidence or logic to change them.

Beliefs at the core of my web would include statements such as the following:

It is difficult to imagine what logic or evidence could shake any of these beliefs. Beliefs near the periphery of my web would include statements such as the following:

These beliefs are near the periphery of my web because it is easy to imagine evidence or arguments that could overturn them. On the other hand, I could also envision becoming aware of evidence or arguments showing that any one of these statements should be nearer the core of my web, because other core beliefs depend on them in a critical way.

The point of the “web of belief” metaphor is to show that we can hold just about anything to be true, so long as we are willing to accept the consequences for other beliefs. I could try to believe that the sun revolves around the earth, but I would also have to reject large portions of modern science and tools of philosophy like Occam’s Razor in order to do so.

Reading evidence and arguments helps us to revise our webs of belief. Whenever we learn something that we didn’t know before, we incorporate the new learning into our web and discard any more weakly supported statements that contradict it. Science, including social science, and philosophy, including moral theories, work in different ways.

Science works on the basis of evidence coming from experience. New observations about the world can lead us to reject views about how the world works that are less well supported by observations. Someone could do a study of the minimum wage showing that job losses are larger than previous studies have shown, and if the study gives a plausible reason why previous studies were flawed, I would have a good reason to revise my view about the effects of the minimum wage.

Philosophy sorts out our concepts using logic and intuition. Suppose that I believe the government has the right to enforce drug laws, but I also believe that it would be wrong for me to go around kidnapping and imprisoning people for making, having, or selling drugs. Michael Huemer shows that it is difficult, maybe impossible, to believe both of those things. That’s not the same as proving one of those views wrong: it just means that I cannot believe both things at once; I’ll have to accept the more “core” belief and shed the more “peripheral” one.

The most valuable information is that which can challenge our more fundamental beliefs. While the “hard core” of my web of belief is virtually untouchable, there have been times that beliefs I thought were fairly fundamental have been overturned. Henry Hazlitt’s Economics in One Lesson changed my views about international trade when I was a teenager, for instance. David Friedman’s The Machinery of Freedom also changed my mind on the consequences of competitive governance — and then later readings like Charles Tilly’s books and articles changed my mind about the stability of competitive governance.

When has something you read changed your view about something fundamental?