“Thanksgiving, Ethics, and Economics” or “Why The Lesson of Plymouth Plantation Lasts Longer Than One Day in November” 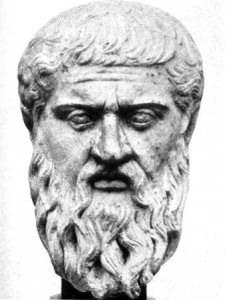 On December 9, 2015, as students reconvened with E3NE following their Thanksgiving break, we decided to reflect on history, and how it provides lessons in ethics and economics.

But first we needed to define a few terms, and keep our eyes peeled for a few others that would be important for the future and intellectual growth.

I asked the students to write what they believed to be the definitions of “morals” and “ethics”. Are morals subjective, or universal? How does that translate to ethics? Also, what are “rights”, and how do the concepts of ethics and social order/interaction have bearings on the concept of “rights”?

With these questions laid out, we went around the class to explore the answers, concluding that since human beings are subjective creatures, our morals are, by association, subjective. But ethics… Ahh, that could be a different thing. We discussed that there is a famous adage about morals and ethics: “Morality is knowing (internally) that it is wrong to cheat on a spouse. Ethics is making sure one does not.” The difference here is clear: Morality is internal, and ethics are the external manifestation of our subjective morals in practice.

Since it seems right to observe that most humans tend to want to maximize pleasure and minimize pain, when these humans with subjective morals but similar goals come into contact with one another, they tend to shun or avoid those who cause them harm or more toil, and welcome those who respect their peaceful endeavors. As a result, we can see an organically arrived societal conception of “ethics” in action… The idea of “rights” appears in history – you do that which is “right”, you have a “right” to your person and that to which you apply your labor to help you survive and enjoy life, and others get the same respect. Morality in action embraces “rights”, including property rights.

It’s a kind of negative reciprocity. “I’m around others, and promise to keep my hands off their property, while they treat me with the same respect.”

We can’t have “positive rights” to things, because that would abrogate the peace, put us at each others’ throats, place us in chaotic states of perpetual predation and hardship, always at the mercy of threats and coercion – and these are the very things we find most people try to avoid, the things folks call immoral and unethical when they come into contact with each other.

But surely this isn’t always the case, right? Great thinkers like Plato and his teacher, Socrates, advocated the abolition of private property and the benefits of subsuming private vocational decisions in favor of a political collective, where labor would be directed by a central authority. These men are portrayed as deep thinkers, so perhaps our ideas about morals and ethics and private property rights are wrong. It’s too bad there aren’t historical examples to show us what happens to a society that abandons private property ownership and free trade in favor of collective property and mandated behavior… 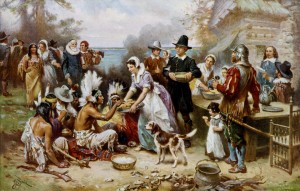 That’s where Thanksgiving, and Plymouth Plantation, come in. As many of us know, the Pilgrims of Plymouth Plantation nearly starved during their first year. The winter was especially hard, and many died of malnutrition or returned to Europe. Some teachers tell their students that the Pilgrims (in fact, not all the settlers were known as Pilgrims, but we will use that lexicon for our purposes here) received aid from the local Indian tribes, and were able to survive. According to this fictional retelling of the story, the next year, the Pilgrims invited the Indians to a feast to thank them.

But that is not what happened to inspire the feast, and it is incorrect about the reasons the Pilgrims survived.

In fact, the settlers in Plymouth almost died because they tried “Plato’s Grand Idea” of communal property and assigned work. They had little food for the winter because few had any incentive to work, and there was no retention of the fruits of one’s labor or market trade to inspire competition and greater productivity.
As Governor William Bradford noted in 1623:

The experience that was had in this common course and condition, tried sundry years and that amongst godly and sober men, may well evince the vanity of that conceit of Plato’s and other ancients applauded by some of later times; that the taking away of property and bringing in community into a commonwealth would make them happy and flourishing; as if they were wiser than God. For this community (so far as it was) was found to breed much confusion and discontent and retard much employment that would have been to their benefit and comfort. For the young men, that were most able and fit for labour and service, did repine that they should spend their time and strength to work for other men’s wives and children without any recompense. The strong, or man of parts, had no more in division of victuals and clothes than he that was weak and not able to do a quarter the other could; this was thought injustice. The aged and graver men to be ranked and equalized in labours and victuals, clothes, etc., with the meaner and younger sort, thought it some indignity and disrespect unto them.

And for men’s wives to be commanded to do service for other men, as dressing their meat, washing their clothes, etc., they deemed it a kind of slavery, neither could many husbands well brook it. Upon the point all being to have alike, and all to do alike, they thought themselves in the like condition, and one as good as another; and so, if it did not cut off those relations that God hath set amongst men, yet it did at least much diminish and take off the mutual respects that should be preserved amongst them. And would have been worse if they had been men of another condition. Let none object this is men’s corruption, and nothing to the course itself. I answer, seeing all men have this corruption in them, God in His wisdom saw another course fitter for them.

The settlers tried the “Platonic Ideal” and it failed.

But when they instituted the recognition of private property rights, land and product ownership, people worked harder, produced more, and traded. In fact, they created such a surplus, they were able to invite the local native tribes to join them in a feast, and they thanked the God they worshipped for giving them the wisdom to leave Plato’s bad idea in the dust of history.

This is a seminal moment in world history itself, for it shows us that, just as we discussed, ethics among others tends to lead us to respect property rights, and those rights help us prosper. They foster division of labor, competition, and trade, trade which, in turn, helps us do something very important: determine prices with our transactions.

As we explored in our previous session, these prices allow people to offer their personal valuations about products, time, work, and resources, which, in turn allow others – both buyers and potential sellers/suppliers – to use that price information to attenuate their own activities. Only with private property can market decisions, based on subjective valuation, help provide the essential information that leads people to supply more of things, or less of things, leads people to switch from more dear resources to more plentiful ones, leads people to invent when prices become too high and a replacement is deemed more productive. Every nuance of better living standards owes itself to people being free to determine what betters their lives and acting on those decisions.

For example, what if, after a hurricane in, say, Florida, certain forces tried to tell the owners of bottled water companies that they could not increase their price above a mandated low rate? After all, people need the water…

There would be a shortage of water, just as there was a shortage of food in Plymouth when the people there were not allowed to determine their own prices, trade unhampered, and keep the fruits of their labor.

Plato’s ideas held sway for a long time, and it was easy for people who dealt in the theoretical to call him a hero. But he was wrong, and, thankfully, we can remember the lesson of the Pilgrims in Plymouth long after Thanksgiving.